Note from Amelia: This is my 50th blog post! And to celebrate, I'm letting another blogger do all of the work. Welcome Michael Kleen, writer, photographer, fellow storyteller, and longtime friend. I had the honor of hosting Michael's documentary, Tinker's Shadow: The Hidden History of Tinker Swiss Cottage. He shares this fascinating story and partial excerpt from his unique volume on an oft-overlooked topic in Midwest lore, Witchcraft in Illinois: A Cultural History: 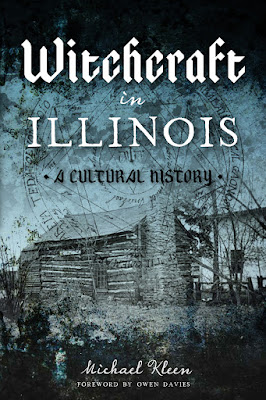 At the turn of the twentieth century, Chicago was known as a hub for the meat packing industry. Thousands of immigrants, particularly from Eastern Europe, flooded into the southwest side Back of the Yards neighborhood to work at the Union Stock Yards. Upton Sinclair famously wrote about this area in his 1906 novel The Jungle.

These immigrants, mainly Bohemians, Moravians, and Slovakians, brought their folk beliefs with them when they came to the Windy City, including a strong belief in witchcraft. We will never know how many accusations, confrontations, and strained relationships this belief caused, but occasionally an accusation of witchcraft made its way to the courthouse and into the press.

Victor Sleeth was an assistant superintendent for Armour & Co., the meatpacking company that defined Chicago’s Back of the Yards neighborhood. Armour & Co. opened in Chicago in 1867 and by 1910 employed over 8,700 people at the Union Stockyards. Victor’s 22-year-old wife, Mary, had contracted consumption. She was in the advanced stages of the disease when her sister, 21-year-old Augusta Wilke, an assistant foreman at Armour & Co., called in a 50-year-old nurse named Mary Vogel.

Vogel attended to Mary Sleeth for a month, until Mary died on February 2, 1919. On Monday, February 24, William L. Sehlke, a masseur and husband to Mary Vogel’s other sister, Martha, went to the Stockyards police to ask for warrants for the arrest of Mary Vogel and Augusta Wilke.

William and Martha Sehlke told the Chicago Daily Tribune an incredible tale. According to the Sehlkes, Mary Vogel was a witch and Augusta Wilke was her understudy, and they sought protection from her slander and sorcery. Augusta allegedly told Martha that Mary Vogel believed Martha was a witch and had poisoned her sister for the benefit of two other witches, a Mrs. George Hellman and Mrs. Marian Sleeth, a widow and Mary Sleeth’s sister-in-law.

In turn, Martha accused Vogel of being a witch. Father Phillips of the Franciscan Fathers of St. Augustine Church told reporters he went to Victor and Mary Sleeth’s home, where he found Vogal burning salt in the oven and incense in the rooms. “She was making motions with her hands, and I told her to get out, and she did,” said the priest.

According to Martha Sehlke, “Mrs. Vogel was burning salt and incense. She got a lamb’s heart and put some new pins in it and burned it. This was to find out which of us ‘witches’ would be around that day and to cast a spell over the one that would come.” After her sister’s death, Martha alleged that Vogel sent for William Wilke, her brother-in-law, and a week later he died.

Public record does not reveal if this dispute was ever resolved, but it demonstrates a continued association between witchcraft, sickness, poison, and a breakdown in social relations. The traditional tools of witchcraft—incense, salt, pins, organs—remained in use even in industrial-era Chicago following the First World War.

Was the proceeding case an isolated incident, or does it reveal an undercurrent of belief in magic and witchcraft in early-twentieth century Chicago? In 1903, the Chicago Daily Tribune investigated this question and concluded, “That more people believe in witches in Chicago than ever believed in them in Salem, or any of the other witch centers of old, sounds like a joke, but it is a solid fact.”

Based on cases investigated by the Chicago Police, the Tribune concluded Chicago was home to not hundreds, but thousands of believers. The strange case of Mary Vogel and Augusta Wilke is a fascinating glimpse into that world.

Michael Kleen is a writer and photographer with an interest in history and the unusual. He has written several books, including Witchcraft in Illinois: A Cultural History, and directed the documentary Tinker’s Shadow: The Hidden History of Tinker Swiss Cottage.

AMELIA IS THE HOST OF